This article is about word completion on limited keyboards, such as mobile phone keyboards. For a similar article for general keyboards, see Autocomplete.

Predictive text is an input technology used where one key or button represents many letters, such as on mobile phones‘s numeric keypads and in accessibility technologies. Each key press results in a prediction rather than repeatedly sequencing through the same group of “letters” it represents, in the same, invariable order. Predictive text could allow for an entire word to be input by single keypress. Predictive text makes efficient use of fewer device keys to input writing into a text message, an e-mail, an address book, a calendar, and the like.

Theoretically the number of keystrokes required per desired character in the finished writing is, on average, comparable to using a keyboard. This is approximately true providing that all words used are in its database, punctuation is ignored, and no input mistakes are made typing or spelling.[1] In practice, these factors are found to cause tremendous variance in the efficiency gain.[2] The theoretical keystrokes per character, KSPC, of a keyboard is KSPC=1.00, and of multi-tap is KSPC=2.03. Eatoni’ LetterWise is a predictive multi-tap hybrid, which when operating on a standard telephone keypad achieves KSPC=1.15 for English.

Short message service (SMS) permits a mobile phone user to send text messages, (also called messages, SMSes, texts, and txts) as a short message. The most common system of SMS text input is referred to as “multi-tap“. Using multi-tap, a key is pressed multiple times to access the list of letters on that key. For instance, pressing the “2” key once displays an “a”, twice displays a “b” and three times displays a “c”. To enter two successive letters that are on the same key, the user must either pause or hit a “next” button. A user can type by pressing an alphanumeric keypad without looking at the electronic equipment display. Thus, multi-tap is easy to understand, and can be used without any visual feedback. However, multi-tap is not very efficient, requiring potentially many keystrokes to enter a single letter.

In ideal predictive text entry, all words used are in the dictionary, punctuation is ignored, no spelling mistakes are made, and no typing mistakes are made. The ideal dictionary would include all slang, proper nouns, abbreviations, urls, foreign-language words and other user-unique words. This ideal circumstance gives predicive text software the reduction in the number of key strokes a user is required to enter a word. The user presses the number corresponding to each letter and, as long as the word exists in the predictive text dictionary, or is correctly disambiguated by non-dictionary systems, it will appear. For instance, pressing “4663” will typically be interpreted as the word “good”, provided that a linguistic database in English is currently in use, though alternatives such as home, hood, hoof are also valid interpretations of the sequence of key strokes.

The most widely used systems of predictive text are Tegic’s T9, Motorola’s iTap, and the Eatoni Ergonomics‘ LetterWise and WordWise. T9 and iTap use dictionaries, but Eatoni Ergonomics’ products uses a disambiguation process, a set of statistical rules to recreate words from keystroke sequences. All predictive text systems require a linguistic database for every supported input language.

In dictionary-based systems, as the user presses the number buttons, an algorithm searches the dictionary for a list of possible words that match the keypress combination, and offers up the most probable choice. The user can then confirm the selection and move on, or use a key to cycle through the possible combinations.

A non-dictionary system constructs words and other sequences of letters from the statistics of word parts. To attempt predictions of the intended result of keystrokes not yet entered, disambiguation may be combined with a word completion facility.

Either system (disambiguation or predictive) may include a user database, which can be further classified as a “learning” system when words or phrases are entered into the user database without direct user intervention. The user database is for storing words or phrases which are not well-disambiguated by the pre-supplied database. Some disambiguation systems further attempt to correct spelling, format text or perform other automatic rewrites, with the risky effect of either enhancing or frustrating user efforts to enter text.

Predictive entry of text from a telephone keypad has been known at least since the 1970s (Smith and Goodwin, 1971). Aspects of predictive text have been patented for instance by Kondraske(1985), while a fully functional keypad to text system for communicating with deaf people via phone was patented in 1988 by Roy Feinson #4,754,474), that included most of the features of modern predictive text systems including disambiguation and local dictionary storage. Predictive text was mainly used to look up names in directories over the phone, until mobile phone text messaging came into widespread use. Sinclair’s ZX80/81 also possessed a form of predictive. 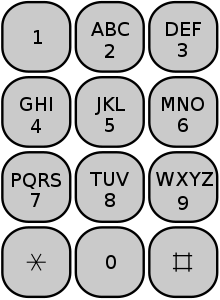 Suppose a user wishes to type “The”. In a traditional “multi-tap” keypad entry system, it would be necessary to do the following:

Meanwhile, in a phone with predictive text, it is only necessary to:

The system updates the display as each keypress is entered to show the most probable entry. In this case, predictive text reduced the number of button presses from 5 to 3. The effect is even greater with longer, more complex words.

A dictionary-based predictive system is based on hope that the desired word is in the dictionary. That hope may be misplaced if the word differs in any way from common usage—in particular, if the word is not spelled or typed correctly, is slang, or is a proper noun. In these cases, some other mechanism must be used to enter the word.

Words produced by the same combination of keypresses have been called “textonyms”;[3] also “txtonyms”;[4] or “T9onyms” (pronounced “tynonyms”[3]), though they are not specific to T9. Selecting the wrong textonym can occur with no misspelling or typo, if the wrong textonym is selected by default or user error. As mentioned above, the key sequence 4663 on a telephone keypad, provided with a linguistic database in English, will generally be disambiguated as the word “good”. However, the same key sequence also corresponds to other words, such as “home”, “gone”, “hoof”, “hood” and so on. For example, “Are you home?” could be rendered as “Are you good?” if the user neglects to alter the default 4663 word. This can lead to misunderstandings; for example sequence 735328 might correspond to either “select” or its antonym “reject”. A 2010 row which led to manslaughter was sparked by a textonym error.[5] Predictive text choosing a default different from that which the user expects has similarities with the Cupertino effect, by which spell-check software changes a spelling to that of an unintended word.

Textonyms have been used as Generation Y slang; for example, the use of the word “book” to mean “cool”, since “book” is the default in those predictive text systems which assume it is more frequent than “cool”.[6] This is related to cacography.

Textonyms in which a disambiguation systems gives more than one dictionary word for a single sequence of keystrokes, are not the only issue, or even the most important issue, limiting the effectiveness of predictive text implementations. More important, according to the above references,[which?] are words for which the disambiguation produces a single, incorrect response. The system may, for example, respond with “Blairf” upon input of 252473, when the intended word was “Blaire” or “Claire” both of which correspond to the keystroke sequence, but are not, in this example, found by the predictive text system. When typos or misspellings occur, they are very unlikely to be recognized correctly by a disambiguation system, though error correction mechanisms may mitigate that effect.

This article uses material from the Wikipedia article predictive text, which is released under the Creative Commons Attribution-Share-Alike License 3.0.

This site uses Akismet to reduce spam. Learn how your comment data is processed.